“Blessed are the peacemakers, for they will be called children of God.”
Matthew 5:9

Jesus came to form the family of God.

But the family of God constantly wants to fight one another.

The only ones in the beatitudes who are called children of God are those who are the peacemakers. Jesus is trying to get the family together, and the peacemakers are the ones helping him do that.

Noah and the Ark

Now when Noah went out looking for animals to bring onto the Ark, you can bet he was looking for peaceful animals — animals that would get along with each other. They were going to have a long journey in cramped quarters and he wanted to make sure the animals that he brought along would be peacemakers on the Ark.

There are animals who have that peacemaking quality in them. I’ll give you two examples.

The nanny goat and the bulls

The first was at a bull farm. Bulls love to fight each other. But at this certain bull farm, in a pasture of 70-80 bulls, was a nanny goat with horns. She kept peace in that pasture of bulls for years.

God put it in her heart to be a peacemaker and not let the bulls fight. She disciplined them every time they wanted to fight. That nanny goat was brave, fearless, and made the bulls back off from fighting one another.

Another example is a horse we had called “Amen.” We had two Arabian horses, Josiah and Amen, that were given to us as gifts. Arabian horses are often high-spirited and can be feisty. Josiah was that way and could be hard to handle, but Amen was a peacemaker.

Amen was calm and had a sweet disposition. We could trust him around children, and he gave rides to the little ones without showing any impatience. He also mothered Josiah and settled him down when he was edgy or upset.

Amen and that nanny goat were the sort of animals Noah would have wanted on the Ark.

This quality of being a peacemaker is the kind of gift God would appreciate in His family. It is a gift that God treasures more than some of the more visible or showy spiritual gifts. Those who make peace are the important ones.

Being a peacemaker is not a glorious gift that draws a lot of attention or that people even notice. It is a quiet gift. But those who make peace are those that Jesus calls his sons and daughters.

God is calling us to maturity in the family of God. We’d rather swing from the trees, grab coconuts, and throw them at each other. But hopefully we will grow in generosity, selflessness and in this most important gift of being peacemakers. This needs to happen in the family of God. 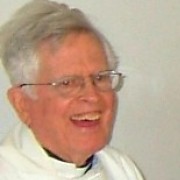 Fr. Rick Thomas, S.J. was a Jesuit priest and founder of The Lord's Ranch Community. A beloved spiritual father and friend to many, he had a tremendous gift of teaching in a clear, practical way. He died in 2006 but his legacy of making the Word of God understandable and applicable lives on.